The "Grand Tour of Mennonitism and Anabaptism" 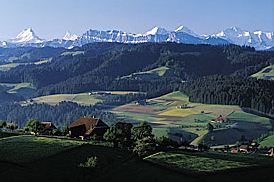 English spoken tour with a focus on the highlights of the Mennonite heritage in Holland, Germany and Switzerland. Imported cities for the Mennonite story as Amsterdam, Münster, Zürich, Bern, and Strasbourg will be visited. A homestay in Detmold with Mennonites from the former Soviet Union will bring new friendships. The free day in the Swiss Alps is a highlight of the tour.

Deposit and Payments: Your reservation will be confirmed upon receipt of a deposit of 345. The remaining 2100 is due before May 17, 2016.

From different parts of the world we will gather at our hotel in Amsterdam. We will share a get-acquainted dinner and preview the tour. The Dutch national Airport Schiphol is located near Amsterdam and our hotel is easy to reach by public transport or a taxi from the Airport. Lodging in Amsterdam, Hotel Atlantis for 3 nights.

The Amsterdam city center has much to offer to Mennonite visitors. We start this morning with a Mennonite walking tour and visit the sites that are important to the 16th century mennonite story, like the Mennonite Singel church, Dam square and Royal Palace. We hear the anabaptist stories of martyrs. We end our city tour at the Anne Frank House.

The Rijks Museum is world wide known for its collection of Dutch Golden Age (17th century) masters like Rembrandt, Vermeer and Jan Steen. We will also have a look at the Mennonite artists in this museum. A canal boat tour will give us a look at the distinctive architecture of the houses along the canals. The afternoon is open for individual pursuits and there are many options - Rembrandt's house, more Rijksmuseum, antique and art shopping on the Nieuwe Spiegelstraat, the Van Gogh museum, a walk along the many canals or whatever it is that you choose. Getting around Amsterdam via the tram network is easy. Another option is to take the train from Amsterdam to Haarlem (15 minutes) to visit the Corrie Ten Boom House or the Frans Hals museum.

After three nights in Amsterdam, we start today our journey from Holland to Switzerland. On our 4-day travel south we make interesting stops. Today we start at the Zaanse Schans, a preserve of Dutch history and Holland's most visited tourist destination. We look at working windmills grinding flour, watch the artisan make wooden shoes and generally enjoy the delights of an earlier time in Dutch (Mennonite) history. After lunch we arrive

in Friesland, the home-country of Menno Simons. Here we find the hidden Mennonite Church in Pingjum and Menno's monument in Witmarsum, the village where Menno was born in 1496. In Pingjum Menno started his career as a Catholic priest. After being promoted to the adjacent (larger) village of Witmarsum he got serious doubts about the Catholic faith and decided to leave the Catholic church. Then it is on to the city of Münster in Germany. Lodging in Münster for 1 night.

A walking tour through Münster gives us more insight in the darker site of the Anabaptist history concerning armed rebellion. The cages once used to lock up the Anabaptist leaders are still hanging against the Lamberti Church tower. On a walking tour of the city center we learn more on Jan Mathijsz, Jan van Leijden, the 16th century anabaptist leaders and Bernhardt Rothmans, the preacher reformator. In the afternoon we will travel on to Detmold and visit the Rusland-deutsche museum. This museum tells the story of the Russian Mennonites, beginning with the 1780 immigration from Poland, Vistula area. Detmold and nearby Bielefeld is home of many Low German (Plautdietsch) speaking Mennonites originating from Ukraine and Siberia. Homestay with Low German speaking host families in Detmold for 1 night.

Martin Luther stayed for more than a year at the Marburg Castle in Eisenach to hide from his enemies. Here he wrote his famous translation of the New Testament. On a tour through the castle we will here all about his life and story. In the afternoon we focus on the legacy of Michael Sattler. In the 1520's Michael was a first generation Anabaptist leader. We find his monument near Rottenburg on the Neckar, the town where he was burned at the stake and his wife Margareta was drowned after their arrest in 1527. In the afternoon we reach the village of Schleitheim in Switzerland where we stay for 2 nights.

Zürich is the city where in 1525 the Anabaptist story started and as such the birthplace of Anabaptism. We will make a walking tour of the old city. Sightseeing will include the City Hall, the Grossmünster Church with its massive bronze doors depicting the story of the Reformation, the Fraumünster Church with the famous stained glass windows by Marc

Chagall, the Limmat river, where Felix Mantz was drowned, the Zwingli monument and the house where Conrad Grebel was born. The Anabaptist Cave near B?retswil is a wonder of nature. As an Anabaptist hiding place it was used for meditation and worship in the 16th and 17th century. On our way back to the hotel we visit Schaffhausen with the famous Rhine Waterfalls.

In 1527 the first Anabaptist Confession of Faith was written in Schleitheim, known as The 7 Schleitheim Articles and instigated by Michael Sattler. The local museum offers a small exhibition devoted to this part of the Anabaptist history. After the museum, it is on to Swiss Emmental, home of many Amish and Mennonite families before emigrating abroad. Langnau is the home of the oldest continuous Mennonite Congregation in the world. Just up

the hill above Langnau is the hamlet of Dürsrütti, where Anabaptists met in secret. Then on to Trachselwald Castle, once used as a lock up for the radical Anabaptists. One of those radicals was Hans Haslibacher. We will hear his story and visit his farm, his descendants are still living there. We drive via Lüdernalp to enjoy a wonderful view over the Emmental hills and the Alps to reach the Mennonite Täuferversteck in Hinterhütten, a typical Swiss homestead with a hidden room to hide hunted Anabaptists from their hunters.

Wandering the picture-postcard old town of Bern, it is not hard to believe that this is a Unesco World Heritage site. In the morning we will make an walking tour to explore this magnificent town, including the Clock Tower, Bear pit and Cathedral. In 1711 a group of Anabaptists were expelled from Bern on 3 boats on the Rhine. We will visit the harbor area where they were boarded. After lunch we visit the Emmental region again for more Anabaptist sites.

Day 11, Friday. Free day in the magnificent mountain scenery of the Alps

Grindelwald is a mountain town with a lot to offer to tourists. Enjoy the magnificent scenery of the Bernese Alps. You can purchase a rail pass for the cog rail train to the Jungfrau (around 150 euro for a return ticket, but an unforgettable experience), or take the cable card (gondola cableway, 40 euro return) to visit a high mountain restaurant for lunch and a walk with a view to the Jungfrau, Eiger and Munch mountain peaks.

In the 17th and 18th century the Swiss Jura was a place of refuge for the persecuted Swiss Anabaptists from the Emmental and elsewhere. Sightseeing will include 'Geiskirchlein' or little church of the goats, an Anabaptist worship cave. Another ancient place of worship was the Bridge of the Anabaptists, recently being renovated. Mennonite inscriptions in the rocks date from as early as 1633. The Mennonite archives of the Swiss Mennonite Conference are accommodated at Jeanguisboden. We will have a look at the old Frochauer bible, copies of the Martyrs Mirror, old song books and family trees with well-known Anabaptist family names. Lodging in the Alsace (France) for 2 nights.

It is Sunday and we will visit the congregation of our Mennonite brothers and sisters in the French village of Ingersheim to attend their service. Our second stop is in Riquewihr, a perfectly kept semi-medieval village. We look at these old houses, built in the 16th and 17th century, their courtyards, their galleries, the old wells and fountains. At the local torture museum we get a glimpse of the cruel ways our Anabaptist forbearers were tortured in order to recant their faith.

Strasbourg is a town of much importance to the early protestant movement. In Strasbourg's tolerant and hospitable climate many of the early 16th century protestant leaders assembled to share their thoughts and ideas. Among them were the Mennonite leaders Michael Sattler and Pilgram Marpeck. On a walking tour we will follow their footsteps. Sightseeing will include a visit to the skyline dominating Cathedral and a canal boat tour. In the afternoon we drive further north to the Romantic Rhine area between Koblenz and Bingen in Germany. Lodging in Boppard for 1 night.

In the morning we make a cruise on the Romantic Rhine near Sankt Goar along the romantic Loreley Rock. Our Anabaptist ancestors, expelled from Bern, Switzerland in 1710 and 1711, sailed the same journey on their way to tolerant Holland. After lunch we drive back to The Netherlands to finish our tour near Amsterdam Schiphol Airport and have our fare well dinner. Lodging near Amsterdam Schiphol Airport for 1 night.

After breakfast we go our separate ways, but the friendships, memories and insights are imprinted and linger for years to come. Fly home from Amsterdam Schiphol International Airport.